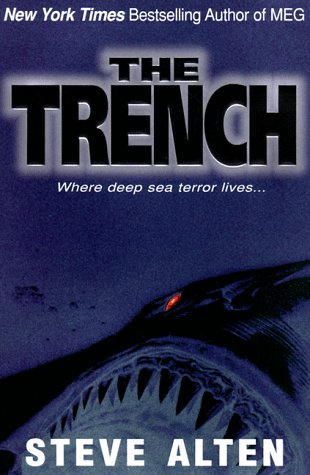 So how bad is this spawn of Meg, which Doubleday declined to publish (albeit perhaps in an earlier version)? About as bad--and as good--as its predecessor. Alten can still write a mean giant prehistoric shark scene, but he flails like a fish out of water at nearly everything else (of his #1 human villain, psycho billionaire Benedict Singer, he writes, ""Benedict stood before the window, his arms outspread, emerald eyes blazing as he reveled in his glory""). It's four years after the bloody doings of Meg, and Angel, the daughter of the Carcharadon megalodon of that novel, is now terrifying tourists at a Monterey aquarium. She escapes, however, and starts eating them--munching on yacht-goers, a kayaker, a submariner--and swallows other animals, including a media-darling whale named Tootie, before she returns to her home in the Pacific's Mariana Trench. The novel isn't all d j -vu shark action, though, since Alten bifurcates the narrative. While paleobiologist Jonas Taylor, who killed Meg, pursues Angel across the seas, his wife, Terry, suffers misadventures galore in the Trench as she tries to uncover exactly what that billionaire (who's in partnership with her father, who owns Angel), is up to 35,000 feet down: nasty work involving nuclear fusion supplies for terrorists, it turns out. Alten's evocation of the Trench and its dangers (including more prehistoric beasts), and of the machinery--subs, minisubs and a giant underwater station--that would challenge them, is evocative and backed by rigorous scientific detail. His human vs. human conflict is screechingly melodramatic and his dialogue littered with exclamation points, but when Angel rolls back her eyes and opens her jaws for the kill, readers will remember with a thrill why they picked up this novel in the first place. (July)
close
Details