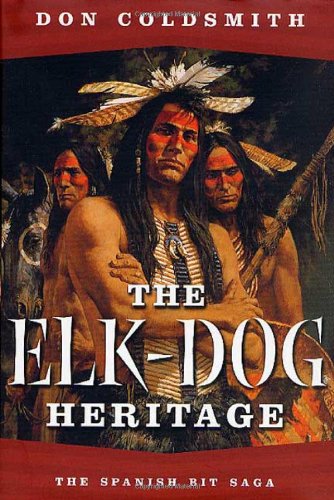 Internal conflict threatens to destroy a Native American tribe in Coldsmith's latest adventure, which takes place on the Midwestern plains as several tribes try to fend off an aggressive tribe known as the Head Splitters. The Elk-dogs fracture when their young warriors exercise their blood lust in a successful attack against the Head Splitters, only to be reined in by their elders. The leader of the youngsters is a rowdy brave named Badger, who is banished when he accidentally kills the tribe's chief guide during a brief tussle. When Badger leaves, several of his followers go with him. This weakens the remaining ranks and forces the leader, Heads Off, to engage in a desperate series of maneuvers as the Elk-dogs are pinned down by the Head Splitters and winter approaches. Coldsmith (; ; etc.) is on familiar ground when it comes to portraying the minutiae of Native American life, although many of the details he musters are overly familiar. The background of Heads Off, at least, is intriguing—formerly known as Juan Garcia, the son of a Spanish nobleman, he became a tribal leader after being captured. The final face-off between the tribes is far too ordinary to make this book memorable, but the characters and the story line are well rendered, as Coldsmith does his usual solid job of bringing this historical culture to life.