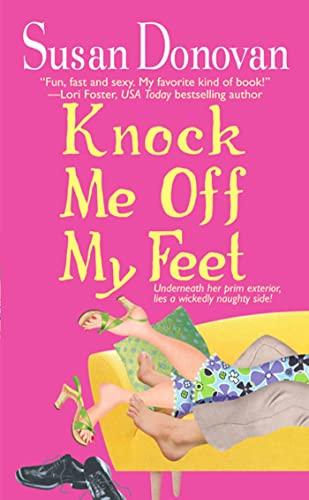 KNOCK ME OFF MY FEET

In Donovan's spicy debut, Autumn Adams honors her mother's deathbed wish when she takes over her role as famed Homey Helen, domestic diva of Chicago's WBBS-TV station. Coaching her mother's fans on the finer points of homemaking is the last thing Autumn wants; she'd much rather be kicking a soccer ball around a field or running a marathon. Fortunately, she has Marjorie Stoddard, her mom's faithful secretary, to pick up the slack. But Marjorie isn't much help when a twisted fan starts sending death threats in the form of grisly household hints, one of which advises her on the proper way to freeze human remains. Autumn receives protection in the form of handsome Detective Stacey Quinn, who thinks Autumn just might be the perfect woman for him. Winning Autumn's affection isn't as easy as he anticipates, however. Marjorie's bad track record with men—"It's like after seven or eight weeks some green slimy and hairy thing with eleven eyeballs suddenly jumps out of the top of my head and the men start running for the nearest exit"—may keep her from pursuing the one man who won't run away. The identity of Autumn's stalker is obvious from the outset, but a surprise ending and lots of playfully erotic love scenes will keep readers entertained.