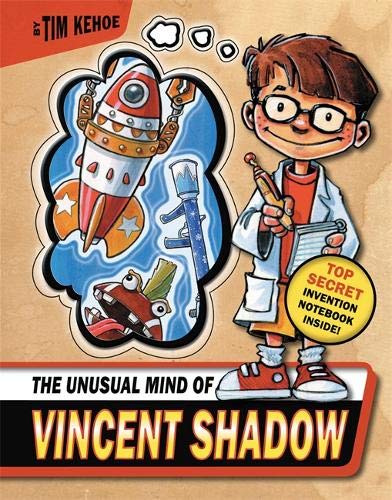 The Unusual Mind of Vincent Shadow

Kehoe's debut is a quick-reading, whimsical tale of a boy inventor, but reliance on the trope of the evil stepfamily undercuts much of the fun. Vincent used to have frequent blinding flashes of inspiration and invented all sorts of wonderful toys in the secret laboratory his late mother built with him. But when his mostly absentee father moves the family to Minnesota, he loses access to most of his inventions (and stops having visions). Forced to sleep in a cold basement laundry room by his stepmother, Vincent's only ray of hope is his eccentric new art teacher, who gets Vincent the opportunity to enter a contest sponsored by toy designer Howard G. Whiz. Unfortunately, Kehoe's characters never amount to much more than cartoons. Vincent's stereotypically nasty stepmother favors her biological children—packing gourmet meals for their lunches, while Vincent gets the dregs—and his oblivious father is absentminded to the point of neglect. Though Vincent gets his expected moment of glory in the end, his family's last-minute turnaround feels pat and halfhearted. Ages 8–12.