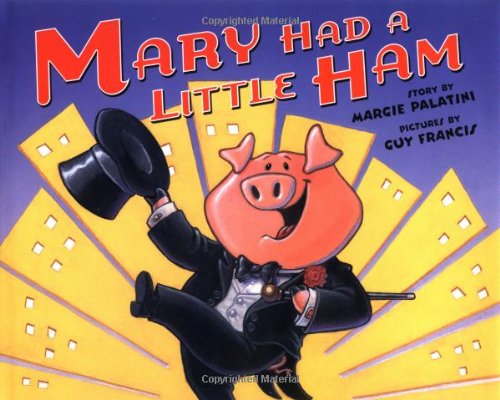 MARY HAD A LITTLE HAM

-hoarding grown-ups may laugh loudest at this story of a piglet meant for bigger things than life on the farm. Young Mary's pig, Stanley Snoutowski, is plump with stage talent: "He could make 'em laugh. He could make 'em cry. And, wow! Could those little pig's feet hoof it!" Once in New York to pursue his career, Stanley faces struggles and setbacks and menial employment. But whenever he feels low (or wonders whether he should get his snout fixed), Mary's letters offer him unconditional encouragement. And when Stanley finally triumphs in she's in the balcony cheering him on. For the most part, Palatini's prose bounces along exuberantly, as in her (reviewed above). But here she underscores her messages about the power of spunk and friendship more than she needs to, and her writing can slide into overworked. Francis (the Adam Sharp series) renders Mary with oddly oversize eyes and large head, but his cute, anthropomorphic Stanley has plenty of, er, animal magnetism. Adults will savor the nods to classic journey-to-stardom moments. There's a literal cattle call that brings out other, desperately-seeking-fame species in cow costumes (one chicken has jerry-rigged a cow's head atop a plunger, which she wears on her own head); and posters for the porcine versions of classic productions that mark Stanley's rise to the top, including "Pork Chop on a Hot Tin Plate," complete with a voluptuous sow in a Liz Taylor 'do and slip. Ages 5-9.