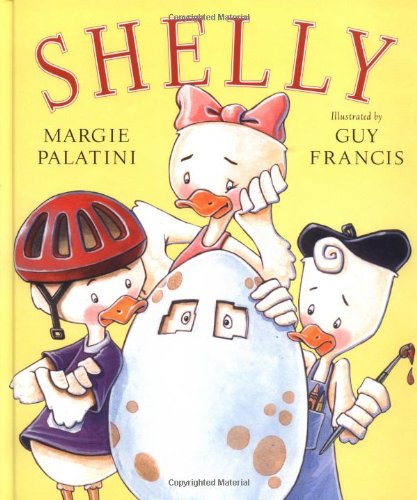 The team behind introduces a trio of high-powered duck sisters and their late-blooming brother. While the three assert their personalities (Adelaide is athletic, Miranda is an artist and Tallulah is a ballerina), "Shelly was not ready." Francis humorously pictures the fellow inside his shell, regarding the world through two peep holes with his webbed feet (outfitted in red Converse-style sneakers) and wings poking through. In reality, however, Shelly ready—on his own terms. When the "impatient" sisters vacate the house, the hero slips out of his shell and has "a very fine Shelly busy day" doing jigsaw puzzles, playing with building blocks and making a sign for his door. It's clear that Shelly is one canny little duckling. The premise is attractive (what youngest child hasn't felt the brunt of his older siblings' overzealousness and impatience?) and Shelly cuts quite a comic figure. Unfortunately, however, the sister ducks, who propel the narrative early on, remain rather one-dimensional (even their bodies look flat). The almost schematic writing is devoid of tension, so that when readers peer into Shelly's secret life, the fellow's wiliness hardly registers. Ages 4-up.