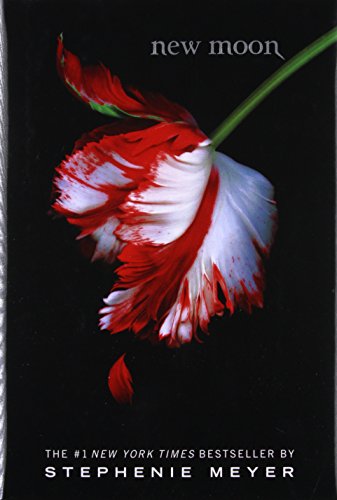 Fans of Meyer's debut novel, , may be disappointed in this second book in a planned trilogy. It begins with a bang, on Bella's 18th birthday, when Edward Cullen sweeps her off to his unorthodox family home (in the first book readers learn that the Cullens are vampires who hunt animals rather than humans) for a birthday celebration. But when Bella unwraps a gift and gets a paper cut, her drops of blood set off a chaos that culminates in the Cullens leaving town. Edward exits on page 73, and does not reappear for nearly 400 pages, except for his voice in Bella's head when she embarks on dangerous adventures, such as motorcycle riding and cliff diving. Instead, this book focuses on Jake, her friend from La Push, who has some unusual traits of his own. A Quileute legend that he confides in Bella in the first book comes to the fore here (and ties in with the title), and Bella is tracked down by the "bad" vampires from the first book, who seek revenge for Edward's murder of their friend James. Long stretches in the book may make readers feel as if they're treading water, but the pace quickens when Alice Cullen sees a vision of Bella cliff diving and mistakes it for suicide. Edward then heads to the all-powerful Volturi vampires in Italy, seeking his own death. Will Bella get to Italy in time to save Edward? Will she remain human? Meyer answers the first question but leaves the second for the third novel. Ages 12-up.