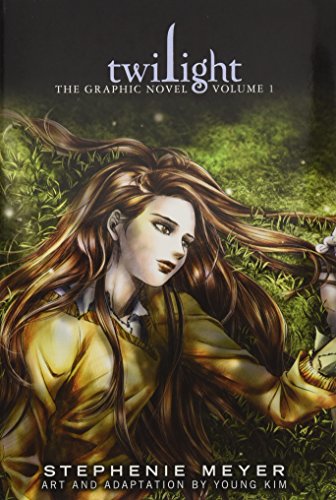 The Twilight Saga continues as the world's most beloved teen vampire story arrives in yet another package: the graphic novel. The story has remained the same: girl meets vampire, girl falls in love with vampire, vampire loves her back and almost gets her killed. Meyers's trilogy has captured by storm the anguished hearts of teens and romance readers—not to mention the jealous attention of the rest of the publishing industry. With each book in the saga, Meyers has built a devoted audience with an insatiable appetite for her series. Yen Press is clearly capitalizing on that audience with this graphic novel adaptation. The hardcover presentation and price-point signal that the book is intended as a collector's item and, at its best, another way to relive the Twilight experience. Unfortunately, this first half of the two-volume adaptation of Meyers's first book brings nothing new to the table. While Young Kim's paneling isn't terrible, her pacing is off, and the book reads unevenly. The dialogue is stilted and the characters come across as annoying rather than expressing longing. reads like a first draft where all the pieces are there, but have yet to meld to one another and actually fit. There are certain angles and physical poses that Kim has not yet mastered, and they stand out starkly in this book. Nevertheless, retailers will be hard-pressed to keep copies of this book on their shelves.