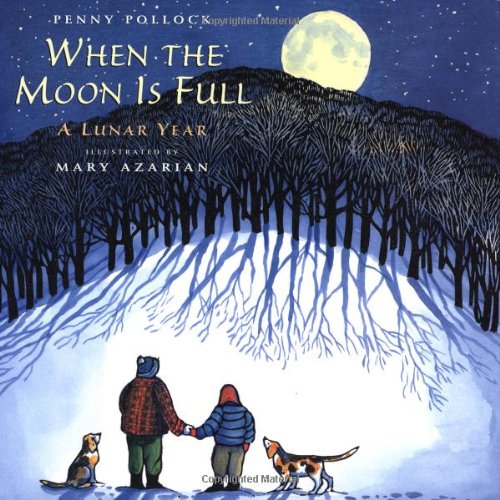 WHEN THE MOON IS FULL: A Lunar Year

Azarian's () hand-painted woodcut prints provide evocative, haunting nature scenes for Pollock's () eloquent poems in honor of each month's full moon. Each new spread reveals a spectacular nighttime vista; readers may well turn the pages as they would a calendar, pausing over the beauty of one scene, anticipating the next. Snow in February yields to sap buckets in March; raccoons feast on corn under the August moon while squirrels gather acorns on September nights. The poems vary in rhythm and mood, and are often arresting in their simplicity: "Lilies of the valley/ ring each silent bell/ when May's bright moon/ lightens up the dell"; in July, "Young bucks/ in the hayfield,/ antlers held aloft./ Moonbeams slanting down,/ show them velvet soft." Traditional Native American names for the moon serve as the poems' titles (January is the "The Wolf Moon") and a simple explanation follows: "Native Americans believed that wolves became restless in January." A concluding question-and-answer page provides additional information about the moon. This lovely volume will likely charm readers and inspire them to linger a bit longer under the night-time sky. Ages 4-8.