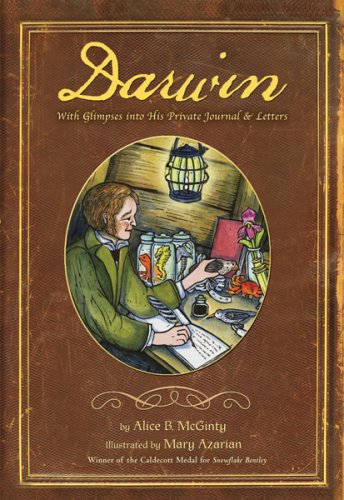 Darwin and the natural world that fascinated him come into clear focus in this picture-book biography that pairs accessible text with handsome woodcut art. Tinted with watercolors, Caldecott Medalist Azarian's ( ) illustrations convey the era in which Darwin lived and his devotion to his work (a humorous scene shows Darwin and his brother fleeing the shed where they conducted chemistry experiments, as green gas billows out). Especially compelling are Azarian's depictions of the young naturalist's five-year voyage aboard the HMS ; he's seen excavating fossils and encountering rare species on the Galápagos Islands. McGinty ( ) includes excerpts from Darwin's correspondence and notebook entries, which illuminate his private concerns and self-questioning. The author also effectively incorporates Darwin's thoughts into her own writing; after the publication of , he “braced himself for the worst. Would people say his work was not complete? Would they believe he was speaking out against the church?” These complementary narratives provide a solid portrait offering insight into Darwin's inner self as well as his accomplishments. Ages 6–9.