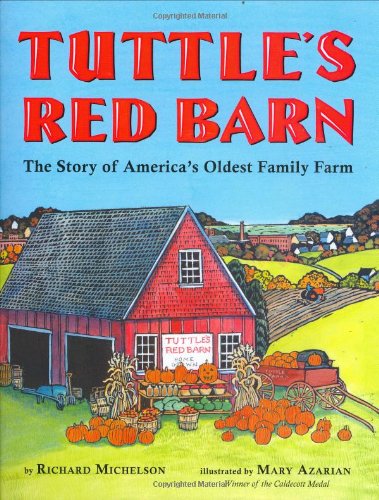 Michelson ( ) and Caldecott Medalist Azarian ( ) salute 12 generations of Tuttles from Dover, N.H., operators of the longest continuously running family farm in the country (tourists may know its Red Barn farm stand). Tuttles “didn’t mind hard work”—a phrase that serves as refrain—and family members found all kinds of ways to reap the land’s bounty: along with planting crops, they also made maple syrup (and sold a sample to Abraham Lincoln), harvested cranberries and grapes, and installed the town’s first cider mill. Each chapter focuses on the male Tuttle who inherits the farm, and that Tuttle, glimpsed in his youth, observes some history (fifth-generation William hears nine cannon salutes fired nine minutes apart on June 21, 1788, when his state becomes the ninth state to ratify the Constitution; two generations later, Joseph helps runaway slaves). Tuttle family lore, meanwhile, gets its own symbol via a pair of pewter candleholders brought from England by the first Tuttle. Michelson doesn’t sentimentalize: the Tuttles endure economic downturns as well as the siren calls of Harvard, Western Expansion and the Industrial Revolution (a friend who leaves his farm for the mills writes, “I only have to work 12 hours a day... and I get Sunday off every week!”). In Azarian’s tableau-like woodcuts, styles change while character endures. Her hand-crafted aesthetic enhances the story’s warmth and humanity, while the sophisticated tints and bold outlines intensify the unalloyed beauty, reassuring rhythms and beguiling fecundity of rural farm life. Ages 5-up.