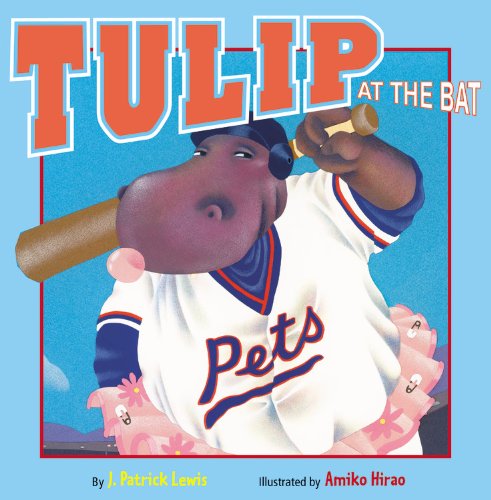 Tulip at the Bat

In Lewis's ( ) good-natured verse about animals who play ball, at times the tempo stumbles and the rhyme feels forced. Performing for a rowdy, colorfully dressed menagerie of spectators at Pet Stadium, the amusingly off-the-wall players—the Boston Beasts and the New York Pets—are down to the last game of a tied World Series. The Pets players taking the field include Truffles Piglet (who "digs a grounder like a spud"), Lance Porcupine (wearing "fifty-fingered baseball gloves") and the title character, Tulip Hippo (with "double stubble chins" and a tutu "held together by a dozen safety pins"), on whom the fate of the game rests, with two on, two out and the Beasts up by one run. "As Tutu Tulip radiates that famous toothy smile,/ , says Coach O'Hare, " She doesn't, but her unorthodox play works, clinching the series for the hometown team. Hirao's ( ) animated art throws out some playful perspectives and wacky images—the depiction of a lobster who "claws to first" while wearing sneakers on eight spindly legs is especially funny. The picture-book crowd may giggle at the players' getups, but they're not likely to follow the action easily or appreciate Lewis's intermittently goofy wordplay. Ages 3-6.