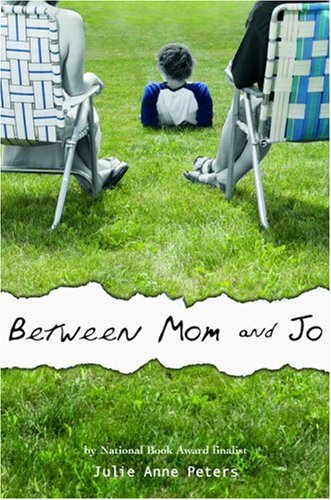 Between Mom and Jo

Nick, 14, tells his story in flashbacks, revealing what it was like growing up with his two moms—and watching their relationship fall apart. Peters's ( ) novel is much more than a story about a gay family. While Nick and his mothers do deal with discrimination (his third-grade teacher does not hang up the family picture he drew, for example), they have all too normal troubles as well, such as Jo's alcoholism, Erin's breast cancer, and eventually Erin's budding relationship with another woman. The author draws the protagonists as full-blooded characters, and readers will likely find it easy to relate to them. Jo struggles to hold down a job, but rescues animals and ferociously protects Nick (after some fifth-graders tease the then-kindergartner about his family, she stands at the school fence for a week, "posturing like a tough guy"). Erin, meanwhile, resents being the responsible one, yet she still gets drafted into the family's watermelon seed–spitting contest. When Nick learns of their separation, his "heart rips. A black hole opens up." Readers may have trouble believing that Erin, Nick's biological mother, would prevent him from seeing Jo after they split up, but overall, they will touched by this story about the struggles of a realistically flawed family. Ages 12-up.