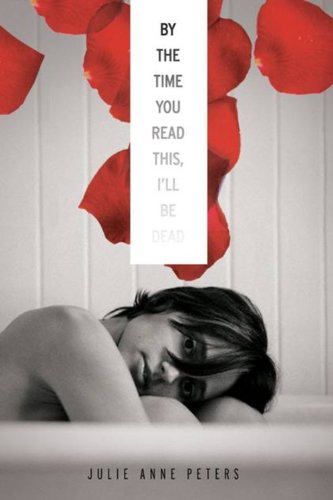 By the Time You Read This, I'll Be Dead

After a few suicide attempts, the most recent of which left her unable to speak, teenage narrator Daelyn joins a Web site called Through-the-Light, which gives her 23 days to prepare for death. Although rules state that “[p]articipants may not attempt to dissuade or discourage self-termination,” the site does send provoking questions so she can think through her choice. Through Daelyn's rants in the site's forums and in her embittered internal narrative, readers will come to understand her struggles (from being molested in the boys' bathroom to being sent to fat camp) and see people trying to connect with her, including offbeat Santana, who is dealing with his own pain—cancer. Peters ( ) doesn't pull any punches (Through-the-Light details various suicide methods, each with an effectiveness rating, and the users' stories are painfully real). Readers may find some plotting heavy-handed (such as Daelyn's growing friendship with a boy who really wants to live), but even so, this book and its open-ended conclusion will challenge teens to think about the impact of bullying—including cyberbullying—and Through-the-Light's controversial stance that “self-termination is your right.” Ages 14–up.