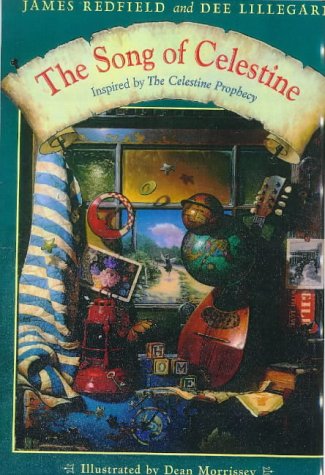 The Song of Celestine: Inspired by the Celestine Prophecy

Redfield and Lillegard spoon-feed the message of The Celestine Prophecy to a younger audience in this overbearing picture book. Lillegard's lumbering, aggrandized verse (""Celestine was filled, filled full/ with energy!/ Celestine was thrilled, thrilled through/ with energy!"") relates the journey of young Celestine, who loses his way in the woods and ends up on a quest for life's deeper meaning. ""Swirled and set in a strange, medieval world,"" he witnesses wars, wanders into a flower-filled field, fights a warrior to keep his ""energy"" and is finally told to go home by a flock of butterflies (and led by a deer), all the while pondering such platitudes as ""Pay attention--now and to the past,"" ""Love,"" ""Dream,"" ""Share,"" ""Rejoice."" There's not enough of a story here to engage the attention of young readers, nor are they likely to grasp the cloaked meaning (e.g., some readers may suspect the ""warrior"" plays a larger role, but never discover what that might be). Conversely, Morrissey's (The Great Kettles) gleaming oil paintings, with their painstaking detail, masterful use of light and deep, saturated colors, remain grounded in reality, with a delicate hint of spiritual forces at work (e.g., a swirling path of moon and stars). His artwork--which, particularly in the still-life scenes, recalls the works of the Dutch masters--plants the seeds for Celestine's epiphany, showing a glimpse of the boy's room in an early scene, with all the elements (flowers, a butterfly, blocks that spell out ""home"") foreshadowed. Yet even the stellar artwork is not enough to hoist this book out of its pompous mire. All ages. (Sept.)
close
Details