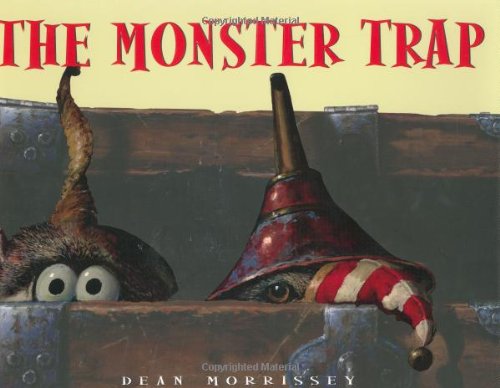 Morrissey ( ) and Krensky ( ) offer an appealing tale set in a seaside town in a bygone time. While his parents are away, Paddy is staying with his grandfather—the first time he has visited Pop by himself. Walking into the man's curio shop and home, the lad muses that "the place looked much darker than he remembered." That night, Paddy and Pop listen to "Monster Radio Theater" on a 1940s radio and at bedtime the boy tells his grandfather that he hears a monster. Pop fashions a makeshift trap that fails to snare a monster, and a "bigger, smarter trap" comes up short, too. Like (reviewed above), the pictures comically reveal benign, silly-looking creatures as the source of the boy's fears. They sneak around at night and let readers in on the nocturnal goings-on that elude Paddy and Pop. But the two finally catch the culprits in action, frolicking on Pop's final, humdinger of a trap reminiscent of Morrissey's previous contraptions—constructed from a train engine, gears, pulleys, barrels and the like ("the bafflesnatch is connected to the flubbernut, and the snogmuddle fits through the plim flaps," explains Pop). In the comforting conclusion, Paddy snuggles in bed with his new monster pals. The oil paintings have an inconsistent focus, ranging from fuzzy to sharp and lifelike. But the spread of the successful monster trap is a standout, and Morrissey makes inventive use of light and playful perspectives. Ages 5-up.