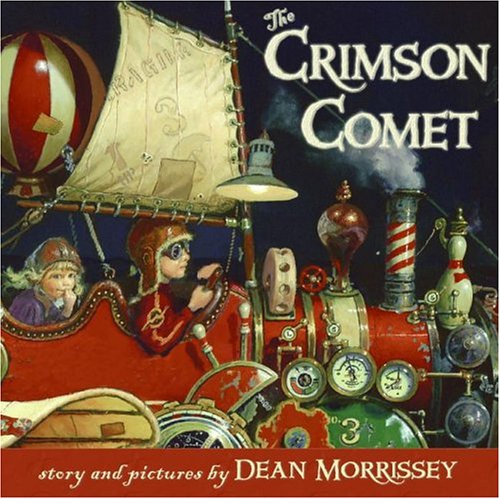 As he did in and , Morrissey centers this visually inventive, dream-like tale on a magical aircraft. After a sleepless girl gazing out her bedroom window notices that the moon "once so bright, suddenly blinked out," her brother decides they should investigate in his "rocket," dubbed the . The siblings climb into this colorful contraption, constructed out of an array of miscellaneous items, including toys, gadgets and gauges, rendered in a photorealistic painting. As they soar through space, the lass plucks stars from the sky until their craft crashes into the unlit moon. Morrisey pictures the moon as a machine-like orb topped by a small cockpit that holds a ship's wheel. At the helm is the Man-in-the-Moon, who explains that the moon has lost power because "my engine's failed," and the cherubic, golden-haired children come to his aid—at their own peril, it turns out (they run out of fuel themselves). But all ends well on this bedtime adventure, buoyed by Morrissey's fanciful paintings, with plentiful images of stars and moons. Ages 5-9.