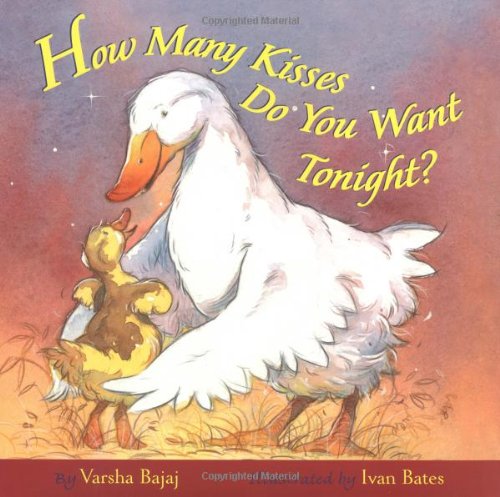 HOW MANY KISSES DO YOU WANT TONIGHT?

Debut author Bajaj celebrates a bedtime ritual set in the animal world—with each succeeding species asking for one more goodnight kiss than its predecessor. The first stop is a bear's den bathed in golden light. Here, as in the other watercolor spreads, Bates ( ) places readers in the thick of the action. A cub gleefully snuggles against his supersize ursine father. " 'How many kisses do you want tonight?'/ Daddy Bear growls, cuddling Little Bear tight./ 'I want ,' laughs Little Bear,/ 'A big, loud kiss on my soft, brown hair.' " A few habitats later, readers find themselves at the edge of a filmy spider web that's strung between two branches against a starry sky. " 'I want ,' he [the spider offspring] says with a giggle,/ 'One on each leg—I'll try not to wiggle.' " Bates portrays animals as expressive as any human parent and child. But he also balances this anthropomorphism with authentic details of character and environment. In the spider spread, for instance, he articulates the hair on the insects' legs and other distinctive markings; rather than make the web tidy and symmetrical, he renders it as a roughhewn structure and emphasizes the industry and craftsmanship behind it. The animal portraits are so vibrant that when the book does visit the human world in the final two spreads, the familiarity of the characters is almost a letdown. But that's a minor quibble in a book that deserves a hearty embrace. Ages 3-6.