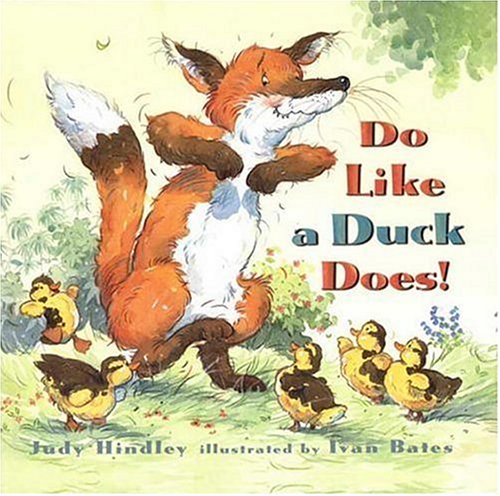 A hungry fox tries to convince a duck family that he's just a "big, brown" version of one of them: " 'Yes I am!' says the stranger./ It's really, really true!/ I can waddle, I can scuttle./ I can strut a little, too./ I'm a duck!/ I'm a duck!/ I'm a duck like you!" But Mama Duck exposes his ruse by putting the fox through his duck paces, making him wallow in a mud puddle, eat bugs and swim underwater. "I really always knew that was no duck," says Mama triumphantly, as the sopping, half-drowned fox finally slinks away. Hindley's () tight, percussive rhymes give the story a drumbeat momentum as the climax nears. Bates's () watercolors possess a sunlit, translucent grace, yet he still reaps plenty of comedy from his characterizations—whether it's Mama Duck's narrowed-eyed maternal skepticism or the fox's woeful look as he plunges into the drink. Other details, such as the fox's snout peeking out from the flower pots or piglets romping in the mud with the ducklings, keep the setting cheerful and familiar, and undercut the villain's menace. Ages 3-5.