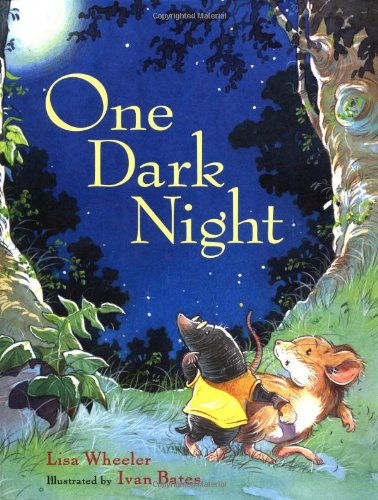 Cleverly mixing suspense and humor, this well-crafted book begins cozily: "In a wee little house,/ In a wee little hole,/ Lived a wee little mouse/ And a wee little mole." The scene abruptly shifts to a " lair" where a " bear" is getting hungry and irritable ("He growled growls/ He stomped feet"). Tension builds as the full-bleed spreads alternately illustrate the perils of Mouse and Mole, who leave their house "one dark night" and get lost in the woods, and vignettes of Bear as he grows hungrier and hungrier. Bates () paints the giant bear in rich golds and browns, heightened by the firelight emanating from his hearth, meanwhile casting Mouse and Mole in nighttime shadow, dwarfed by the roots of silvery-green trees. Wheeler's (, Children's Forecasts, Dec. 2, 2002) engaging rhymes and well-timed cross-cutting between the scenes creates an air of shivery expectancy as Mouse and Mole head into what looks like a direct confrontation with Bear. The tables turn in an ending that will surprise, satisfy and spur repeat readings. Ages 3-7.