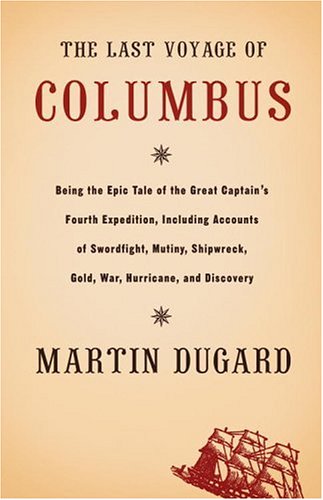 THE LAST VOYAGE OF COLUMBUS

"For a guy who's been dead five centuries," says Dugard, "Columbus was very much a physical presence as I wrote this book." The author's Columbus—who engages in swashbuckling deeds of derring-do as he explores the Caribbean and Central America in his fourth and final voyage (1502–1504)—is a guy's guy. Spurning views of Columbus as a harbinger of genocide, Dugard ( , etc.) senses virile, visionary boldness, a man "fuelled by focus and challenge." Unsullied by too much modern scholarship, this book is at heart a recasting of Washington Irving and Samuel Eliot Morison updated to appeal to readers of and (for which Dugard has written). His is a sexy tale: Columbus flirts with the (much romanticized) queen Isabella; nautical mapmaking is "one of the world's sexiest new occupations." In a text that idolizes navigation skills, there are some geographical slipups (Syria isn't near the site of the Suez Canal), and petty-minded linguists will wonder about Dugard's translations ("La Huerta," for instance, is not "special garden"). Historians might puzzle over the claim that Granada was the "only vestige" of the Moorish invasion (Islam continued to be practiced widely in Spain until the early 16th century). But for those who enjoy exciting descriptions of shipwrecks, bloodshed, shark-infested waters and storms from hell, this may be beside the point. 2 maps.