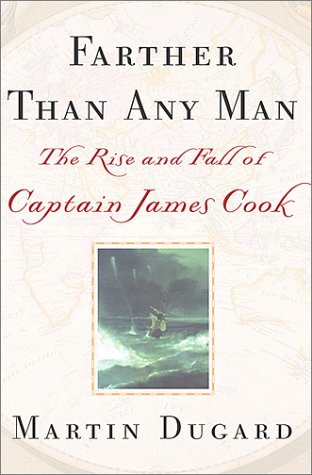 FARTHER THAN ANY MAN: The Rise and Fall of Captain James Cook

In a strong effort "to clear away the tangle of myth and hero-worship" that surrounds his subject, Dugard (), a well-known adventurer himself, deftly recounts the exciting story of James Cook, a farm boy from northern England who at first worked on merchant ships and then, when offered a chance to captain his own ship, turned his employer down and joined the Royal Navy. Cook started at the bottom and worked his way up, but knew he was not from the right social class to advance to captain. However, others recognized his talents: Cook was the first noncommissioned Royal Navy officer to be appointed to command a vessel. His trek with the —which began in 1768 and circumnavigated the globe, charted the coasts of New Zealand, scouted numerous Pacific isles and retrieved botanist Joseph Banks (who grew to respect Cook after trying to steal command of his ship)—brought Cook international fame. Dugard recounts Cook's four-year voyage with the , which also sailed around the world while trying to locate the coasts of the legendary Southern Continent (Antarctica). By the end of this voyage, Dugard contends, Cook's ego had begun to get in the way of his talent. Thereafter, Cook began to make errors and became tyrannical at sea. This character change ultimately cost Cook his life when he was slain by Hawaiian natives. Well researched, with information from Cook's own journals, this fast-paced book brings to life the English explorer driven to outclass his predecessors and contemporaries.