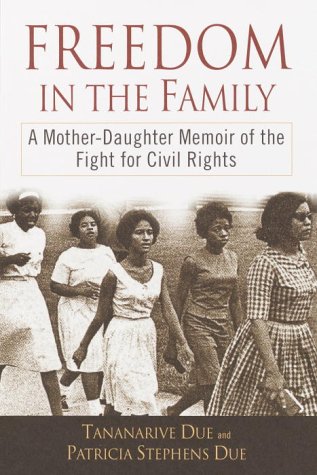 FREEDOM IN THE FAMILY: A Mother-Daughter Memoir of the Fight for Civil Rights

While Martin Luther King was a major influence on Patricia Stephens Due, she knows that the civil rights movement was spurred on by average citizens like her throughout the South in the 1960s, and she sets out in this memoir to write her story as well as the stories of her fellow grassroots activists. Her tale is interwoven with that of her daughter, Tananarive, who won an American Book Award this year for her novel . Patricia's narrative takes the reader through protests at a segregated Woolworth's lunch counter in Florida and numerous arrests that garnered national attention, leading to a correspondence with King as well as baseball hero and activist Jackie Robinson. But Particia's activism did not end with the movement; one of the memoir's most powerful anecdotes, written by Tananarive, recounts a showdown years later between Patricia and an intimidating cluster of police officers who arrived at the family home in Miami in a misguided, racially motivated hunt for thieves. Also tracking the achievements of lawyer John Due, Patricia's husband and Tananarive's father, mother and daughter write (in alternating chapters) with an energy that is cathartic in its recounting of past obstacles, and optimistic in its hopes for the future. 16 pages of photos not seen by .

The Living Blood The Good House,