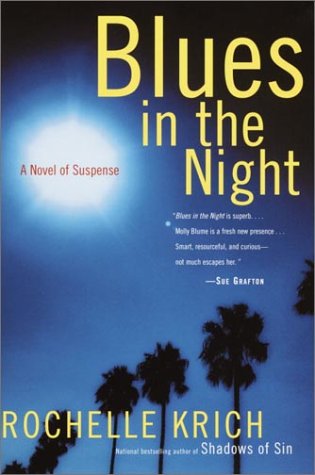 BLUES IN THE NIGHT

With Los Angeles true-crime writer Molly Blume (yes, she gets teased about that a lot), Agatha Award winner Krich ( and four other Jessie Drake mysteries) introduces a smart new heroine in a new suspense series. Molly finds her stories everywhere and has learned to respect that tingle that tells her she's onto something. When a newspaper snippet about a young woman nearly killed by a hit-and-run driver snags her attention, Molly plunges headfirst into the story. It's a bit like falling into the rabbit hole, for the more she learns about the victim, the less she understands. The young woman may have been a tragic figure who killed her infant son while suffering a postpartum psychosis, or a very clever manipulator who planned the murder even before the child was born. She may have committed suicide in the hospital, or she may have been murdered. Molly's onion-peeling investigation will appeal to those who read mysteries for the pleasure of solving an intricate puzzle. Equally appealing, enough to make us wish for more, is the affectionate portrait of a large, boisterous Jewish family. Everyone needs a wise grandmother like Molly's. A sideline love story is a bit of a throwaway, but the fascinating look inside the culture and rituals of Orthodox Judaism more than makes up for it. Krich nicely captures the sense of community that religious faith can create, and she skillfully paints the special beauty of the desert landscape outside L.A.