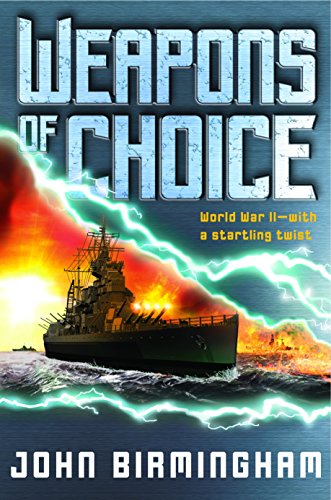 At the start of Australian author Birmingham's stellar debut novel, a United Nations battle group, clustered around the (named after "the most uncompromising wartime president in the history of the United States"), is tasked in the year 2021 with stopping ethnic cleansing by an Islamist regime in Indonesia. When an experiment goes horribly wrong on a special ship doing research on wormholes, most of the battle group is deposited in the middle of the U.S. fleet on its way to Midway in 1942. The WWII carriers and supporting vessels attack a Japanese Self-Defense Force ship, triggering devastating computer-operated defensive fire from the 21st-century fleet. While the action sequences are outstanding, this book really shines in depicting the cultural shock that both navies experience. The group reflects a multicultural society that finds the racist and sexist attitudes of 1942 America almost as repugnant as those of the Axis powers, while the mere thought of non-whites and women not just serving in uniform but holding command drives many Allied officers and civilian officials apoplectic. The author also subtly shows the ways in which 20-plus years of the War on Terrorism have changed our attitudes. Unlike many alternate histories, the novel avoids the wish-fulfillment aspect inherent in the genre. This is the first of what should be a hugely (and deservedly) successful series.