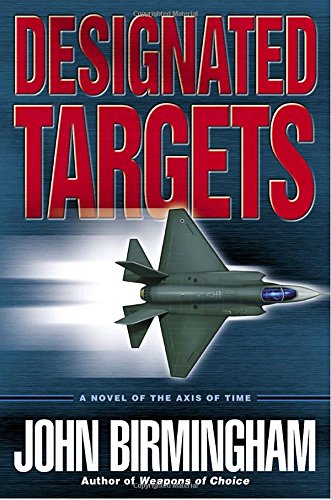 Designated Targets: A Novel of the Axis of Time

In Birmingham's worthy sequel to (2004), the world of the 1940s continues to struggle with the ramifications of the Transition: the intrusion into the middle of WWII by a 21st-century naval task force fighting the global war on terror. While the lion's share of the technological windfall falls into the laps of the U.S. and Great Britain, the Axis acquires enough to increase its deadliness exponentially. Furthermore, Hitler and Stalin make an uneasy peace as they unite to prevent both of their respective systems from being consigned to the ash heap of history, freeing German forces for a renewed invasion of England. The time-displaced warriors from 2021 find that their most implacable foe is not Nazi commando Otto Skorzeny but J. Edgar Hoover, furious at being "outed." The author doesn't make the mistake of pitting his protagonists against morons, and he rightly shows how improvements in command and control trump bigger and better guns. Entertaining cameos by Elvis, Marilyn Monroe and John F. Kennedy will delight the geek in all of us.