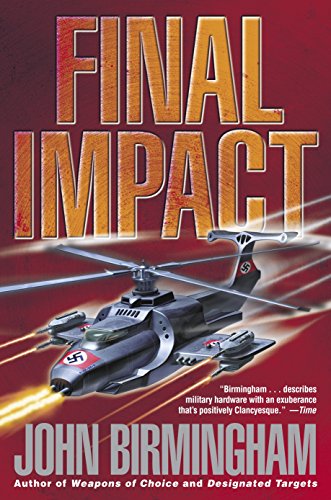 The eagerly awaited conclusion to Birmingham's popular Axis of Time trilogy (after and ) deftly explores how a temporally displaced 21st-century naval battle group changes the outcome of WWII, both militarily and socially. In 1944, the Germans and the Japanese may be close to developing an atom bomb, while the swift Russian advance in the east threatens to engulf all of Europe. Admiral Kolhammer and his future warriors, veterans of 20 or so years of the war on terror, can be just as ruthless as the Axis. How the social changes inspired by Southern California's multicultural "zone" will fare in the face of opposition from the followers of the outed (and self-slain) J. Edgar Hoover remains an open question. Since the western Allies are left facing a Soviet Union that refuses to accept the judgment of history, it's clear that the author has the makings for a sequel. Alternate history fans can only hope Kolhammer and crew will soon be back.