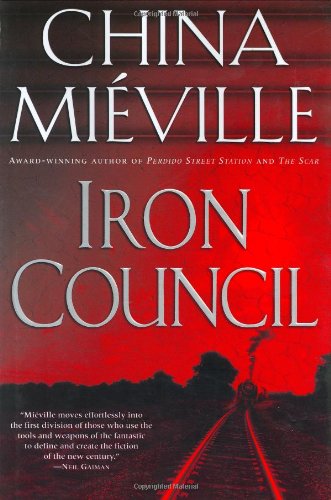 In this stunning new novel set mainly in the decadent and magical city of New Crobuzon, British author Miéville ( ) charts the course of a proletarian revolution like no other. The capitalists of New Crobuzon are pushing hard. More and more people are being arrested on petty charges and "Remade" into monstrous slaves, some half animal, others half machine. Uniformed militia are patrolling the streets and watching the city from their dirigibles. They turn a blind eye when racists stage pogroms in neighborhoods inhabited by non-humans. An overseas war is going badly, and horrific, seemingly meaningless terrorist acts occur with increasing frequency. Radical groups are springing up across the city. The spark that will ignite the revolution, however, is the Perpetual Train. Workers building the first transcontinental railroad, badly mistreated by their overseers, have literally stolen a train, laying track into the wild back-country west of the great city, tearing up track behind them, fighting off the militia sent to arrest them, even daring to enter the catotopic zone, that transdimensional continental scar where anything is possible. Full of warped and memorable characters, this violent and intensely political novel smoothly combines elements of fantasy, science fiction, horror, even the western. Miéville represents much of what is new and good in contemporary dark fantasy, and his work is must reading for devotees of that genre.