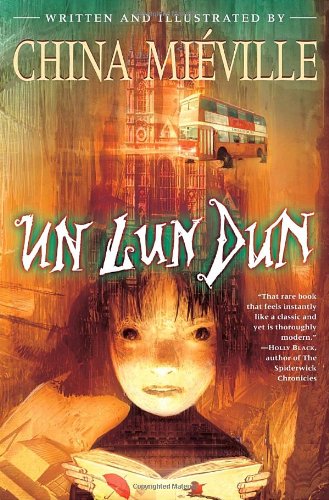 Miéville ( ) presents a remarkable bit of world-building. London teenager Zanna (short for Susanna) starts to experience odd occurrences: clouds that resemble her, strangers who call her the "Shwazzy," and graffiti that reads "Zanna For Ever!" Zanna, it turns out, the Shwazzy ( or "chosen one") of the people of UnLondon (the Un Lun Dun of the title), a surreal mirror-image of London ("Abcities have existed at least as long as the cities," a book of prophecy tells her, "Each dreams the other"). Together, Zanna and her friend Deeba wind up in UnLondon, a Gaiman-esque wonderland of ghosts, zombies, walking garbage cans and sentient umbrellas. (Its people have a sense of humor, describing how they disposed of pre-euro currency, and other parallel "abcities" such as "Parisn't" and "No York"). The Smog, a beast borne of London's "smoke from chemicals and poisons" haunts UnLondon, and it seems that Zanna is the one designated to defeat the Smog. But a twist of fate unleashes unforeseen events and the UnLondoners wind up pinning their hopes on Deeba. Miéville employs a few tricks from the experimental novelist's bag (five-words-long chapters, others that end mid-sentence, puns and wordplay galore) but by and large relies on his formidable storytelling skill for this lengthy yet swift-moving tale that, with a wink and a nod, cuts through archetypal notions of fate and prophecy. Highly recommended for Neil Gaiman and Clive Barker fans especially. Ages 12-up.