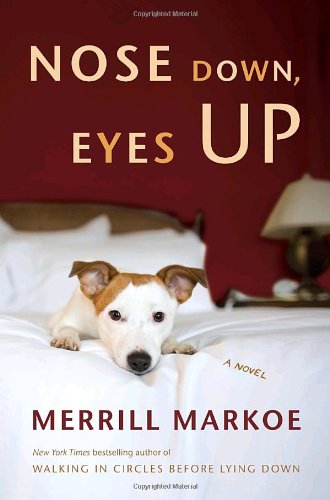 Nose Down, Eyes Up

Jimmy, the canine star of Merrill's second fun-loving doggie novel (after ), is the Tony Robbins of the dog world and holds informal seminars with the neighborhood dogs to instruct them in the art of manipulating their human masters (the key, he intones, is nose down, eyes up). Jimmy's poochly wisdom—spot-on and hilarious throughout—is made available courtesy of his owner, Gil, an unlucky in love handyman who learns how to communicate with dogs. This launches the novel's plot, as Gil shoots down Jimmy's idea that he is Gil's biological son. Soon, Jimmy is intent on meeting his birth mother, who happens to belong to Gil's now-remarried ex-wife. A series of setbacks beset the duo, and the tribulations provide lessons in life, love and finding happiness. The conversations with the wry, wise and lovable Jimmy (and his three other oddball dog pals) comprise the novel's heart and comedic through-line—discourse ranges from business matters to why dogs pee so many times during walks. Markoe's hilarious dialogue should be a must-read for dog lovers.