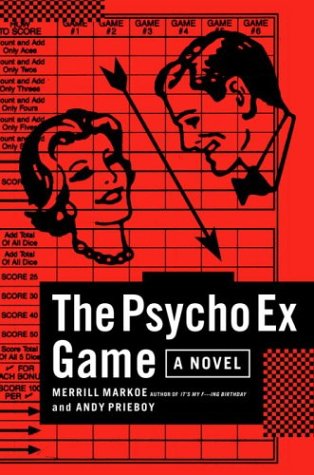 In this collaborative effort, the authors explore the anxiety of personal interaction versus the safety of e-mailing and the dubious trustworthiness of cyber friendships. With her characteristic sharp-witted angst, former David Letterman writer, humorist and novelist Markoe ( ) alternates chapters with music veteran Prieboy, who is perhaps less witty, but twice as angsty. Hip 40-somethings Lisa Roberty and Grant Repka are, respectively, a television writer and rock 'n' roller in L.A. After a brief and slightly awkward introduction backstage at his , they begin an e-mail correspondence. At first it's just friendly and benign, but after a while they begin comparing scars acquired on the battlefield of love. Grant shares horrifying stories of his doomed relationship with a heroin addict, while Lisa, unaware that she's writing to Grant his Pamela Anderson–esque girlfriend Winnie, reveals years of emotional abuse inflicted by her very famous ex, Hollywood A-lister Nick Blake. Markoe's misery is less comical than in her previous novel ("Love relationships seemed to be the place where perfectly nice men went to become nightmarish monsters"), and Lisa seems a derivative of 's unnamed protagonist, with whom she shares a crazy mother and love of sake. Prieboy's prose is darker and more poetic ("Like my mouth was a tiny, festive pink-and-white theater where my monologues died and clown act bombed"), and their styles complement each other nicely. Unfortunately, the concept is more compelling than the finished product, a shame since these two are talented storytellers. This may not appeal to a mainstream audience, but could secure a cult following.