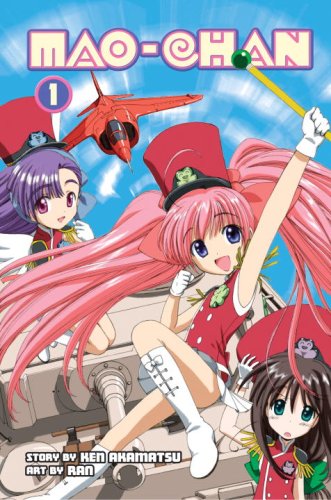 Who are you going to send against invading aliens that look like cuddly kitties and bunnies and baby dolphins? Adorable eight-year-old girl soldiers! They're the only ones who can battle the attackers, fighting cuteness with cuteness. If the premise sounds like a cartoon, it was—a 26-episode anime, now adapted to print. Akamatsu, who provided the story and character designs, is well-known for his harem manga and . In contrast, this story comes from the “magical girl” genre, with the girls transforming into what resemble band majorettes when they press their smiling clover pins, and winning based on determination and niceness. Akamatsu's slapstick comedy and the occasional panty shot are also included for his fans. Although the storytelling can be confusing, the little ones are always cute. There are also older girls to ogle, undercover half-aliens (humans with cat ears) trying to stop the kids, as well as interforce rivalry among the old men controlling the little girls. Best not to think at all about the underlying implications. The plan to release the book in double-sized editions is a good one, since too many volumes of this and the cuteness would become cloying.