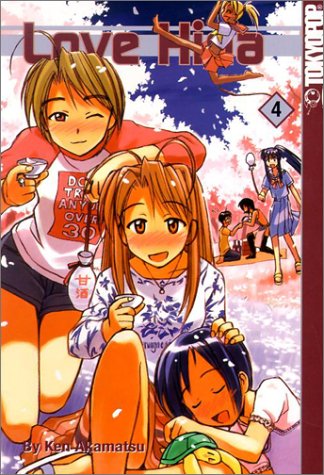 Flying turtles, an all-girl dorm, 20-somethings falling in love (or at least in and out of crushes), hot tub escapades—these are only a few of the elements that Akamatsu throws together with the enthusiasm of a teenager whose hormones are running amok. The plot revolves around the exploits of Keitaro, an earnest, bespectacled kid who runs a traditional Japanese-style estate that doubles as an all-girl dorm. Dubbed Hinata House, Keitaro's living situation comes equipped with a cast of female characters ranging from cute love interest Naru to the hard-drinking sex addict Kitsune. This setup of a single boy in a house full of girls is not as volatile as it might seem, though: in keeping with the book's target audience of preteen girls, this series' humor tends to be only marginally provocative. One of the book's running gags features Keitaro accidentally falling against or groping one of his female friends, for which he is inevitably knocked silly, but that's as risqué as things get. This heavy reliance on sitcom-type humor helps sustain the frothiness of the proceedings, reinforced by Akamatsu's clean, expert drawings. But despite its occasional, fanciful forays into magic realism, the book never moves beyond the predictable. This in itself would not be a problem—it's the rare mainstream manga that deviates too far from standard tv plot lines—but the book also lacks the quirkiness that can be mainstream manga's saving grace, though missing the imaginative sizzle of a truly innovative or even truly engaging manga, this should nevertheless be comfortingly familiar to readers who want nothing more than what's expected.