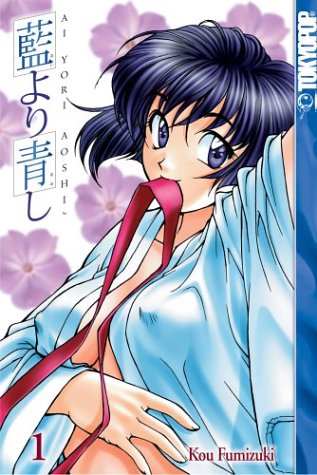 Kaoru Hanabishi is a good-hearted college student who has severed ties to his super-rich family. One day on the subway, he runs into a gorgeous, easily confused young woman in traditional kimono and sandals. She turns out to be his childhood friend Aoi Sakuraba, who has been madly in love with him for her entire life and wants nothing but to marry him, worship at his feet, cook all his favorite foods, scrub his back, warm him with her naked body when he's cold, address him as formally as possible and so on. If Fumizuki's long-running manga romance (the title translates roughly as "True Blue Love") sounds a little bit like a Stepford Wives fantasy, well, it sometimes is. But there's a catch: Aoi is from a power family, too, and they strongly disapprove of her relationship with black-sheep Kaoru. This work is in danger of being a ridiculous sex farce, and Fumizuki plays Aoi's wide-eyed passion and Kaoru's guarded affection for all the comedy it's worth. But it's actually more a comedy of manners: the formality of old-money Japan contrasted with the informality of its modern culture. And Fumizuki has a real fondness for the whole cast—if the artwork is a little on the generic-manga side, the depth of characterization fleshes out Kaoru and Aoi considerably. Be forewarned: as in the immensely popular , there is a lot of overly-coy nudity, and most of the jokes revolve around Aoi's generous bosom.