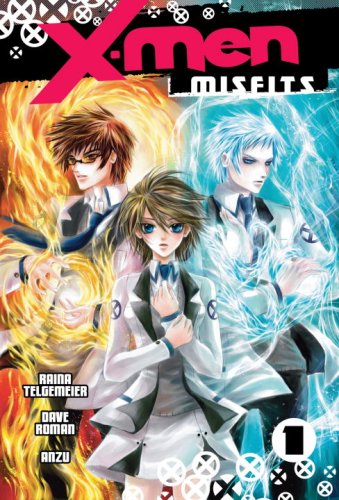 is renowned for being one of the most girl-friendly super hero comics franchises, so a shojo (girl's) manga “re-boot” of the series is not that far-fetched. The conceit of seeing the X-Men redrawn as supercute boys, or in the case of Beast, redrawn as an adorable human-size badgerlike thing, works without a hitch. 15-year-old Kitty Pryde, who has the mutant ability to slip through walls, enrolls in Xaviar Academy, where she meets classic X-men characters, most still in their teen years. By some unexplained twist of fate that could only happen in shojo, Pryde is the only female student (Storm is a teacher). This makes the formerly insecure girl very popular with her peers, so much so that she is asked to join the Hellfire Club, which is hilariously reimagined as a parody of rather than a sinister organization of wealthy elites. Telgemeier and Roman deliver a delightful script that will appeal to old fans while being friendly toward new readers or fans of the films. The art by Anzu ( ) is over-the-top shojo parody, with lots of screentone and flowers.