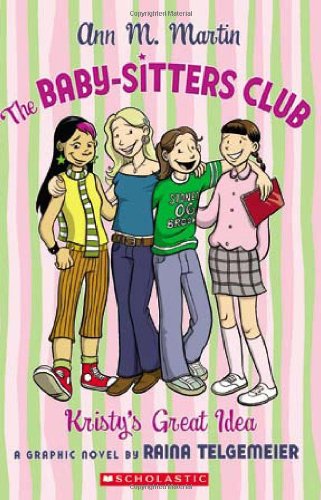 Telgemeieroffers a spirited graphic novel adaptation of the debut title in Martin's The Baby-sitters Club series, the story of the four founding members of this fledgling club. The graphic-style black-and-white panels engagingly spotlight the camaraderie, as well as the minor spats, among the quartet of seventh-graders—outspoken tomboy Kristy, earnest, shy Mary Anne, artistic and free-spirited Claudia and the somewhat secretive newcomer to town, Stacey—as they team up to launch a baby-sitting service. Various sitting jobs provide the story's livelier moments: Kristy arrives at one stint to discover that her charges are rambunctious pooches rather than kids, and Mary Anne attempts to rescue a family's cat from the yard of an alleged witch. Telgemeier also portrays the tale's quieter moments, as Kristy gradually and credibly comes to accept her divorced mother's new fiancé and his children, and Stacey reveals that her mysterious behavior is due to the fact that she has diabetes. The artist adds abundant energy to the pages and, largely through amusingly exaggerated facial expressions, ably captures each character's personality. This will likely hook reluctant readers on this affable group of girls and may well spur a new generation of youngsters to move on to the original series. A second adaptation, , is due in the fall. Ages 9-12.