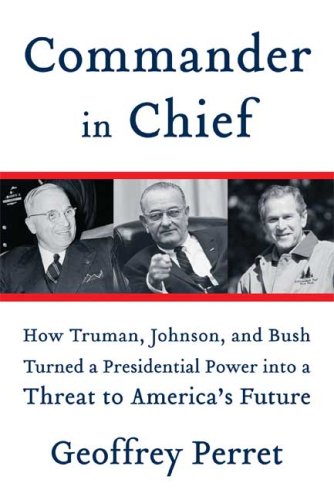 Commander in Chief: How Truman, Johnson, and Bush Turned a Presidential Power into a Threat to America's Future

Few presidents have taken on the title of commander-in-chief of the armed forces with such enthusiasm as George W. Bush, who has advanced a wartime executive power unfettered by judicial or legislative oversight on far-ranging topics like the Geneva Conventions, intelligence gathering methods and targeted assassinations. Presidential and military historian Perret ( , etc.) explores how wars like Korea, Vietnam and Iraq have been used to consolidate power in the hands of a single man. Charting Truman's anti-intellectualism and fetishization of the military, Johnson's shortsighted escalation of the Vietnam conflict and the current administration's hubris, Perret reveals the steps by which presidential power widened. (Inexplicably, Franklin Delano Roosevelt, who created Japanese internment camps during WWII and attempted a coup against the Supreme Court, gets a pass.) While readers at all levels will benefit from Perret's analysis, some sections may be too specialized for nonexperts. The book ends with a thesis that deserves more attention in the body of the work: "China is the only country to have gained strategic advantages from America's three unwinnable wars. The United States has gained nothing, not even the gratitude of South Korea.... Iraq will break American power. Hello, China."