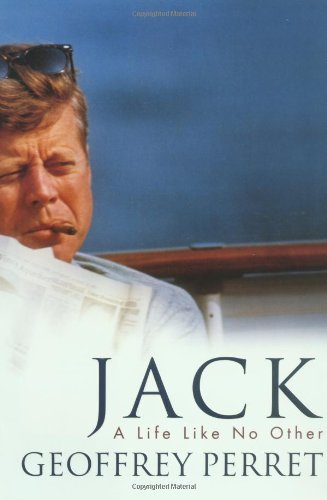 Perret (, etc.) delivers a flawed biography of JFK in which the subject—trapped in the crosshairs of shoddy research and poor prose style—seems unable to come to life. Perret's machine-like, event-driven narrative delivers one well-known fact after another, but the author repeatedly fails to get close to the normally ingratiating Kennedy. Further, Perret's narrative is too often driven by the few new sources he's been able to discover. Thus—due to a recently unearthed travel diary—we get every detail concerning JFK's generally uninteresting 1937 tour of Europe. Other of the book's problems stem from sweeping generalizations and various errors of both fact and interpretation. Discussing Joseph Kennedy Sr.'s Wall Street activities, Perret informs readers that "big stock market speculators" were blamed (by whom? the public? the government? the newspapers?) for the 1929 stock market crash. As regards errors of fact, a few include Perret's misquoting the widely known Catholic prayer "Hail Mary," his references to "Catholic ministers" and his assertion that Jack's bad back did not date from childhood (as medical records clearly show). Perret embarks on yet another arguable sidetrack from reality when he asserts that Kennedy—who always took great pains to separate his public life from his religious life—backed out of a 1948 event involving Protestant ministers after being "ordered" to do so by "the Catholic hierarchy," and then took the unusual step of confessing the same to journalist Drew Pearson. The anecdote, originating with Pearson, deserves scrutiny that Perret does not seem disposed to deliver. And that, sadly, is the story of this book. Photos not seen by