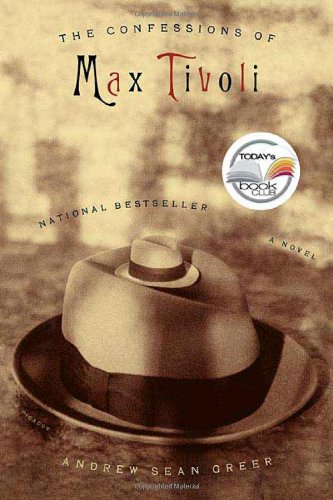 THE CONFESSIONS OF MAX TIVOLI

With a premise straight out of science fiction (or F. Scott Fitzgerald), Greer's second novel plumbs the agonies of misdirected love and the pleasures of nostalgia with gratifying richness. Max Tivoli has aged backwards: born in San Francisco in 1871 looking like a 70-year-old man, he's now nearly 60 and looks 11. Other than this "deformity," the defining feature of Max's life is his epic love for Alice Levy, whom he meets when they are both teens (though he looks 53). Max's middle-aged gentility endears him to Alice's mother and, like an innocent Humbert Humbert, he allows Mrs. Levy to seduce him so that he might be near his love. When he steals a kiss from Alice, the Levys flee. But heartbroken Max gets another chance: when he encounters Alice years later, she does not recognize him, and he lies shamelessly and repeatedly to be near her again. Max's parents, whose marriage is itself another story of Old San Francisco, have advised him to "be what they think you are," and he usually is. But his lifelong friend Hughie Dempsey knows Max's secret, and is intimately connected to the story that unfolds, via Max's written "confessions," in small, explosive revelations. "We are each the love of someone's life," Max begins; it is the implications of that statement, rather than the details of a backward existence, that the novel illuminates. Greer ( ) writes marvelously nuanced prose; with its turn-of-the-century lilt and poetic flashes, it is the perfect medium for this weird, mesmerizing and heartbreaking tale.