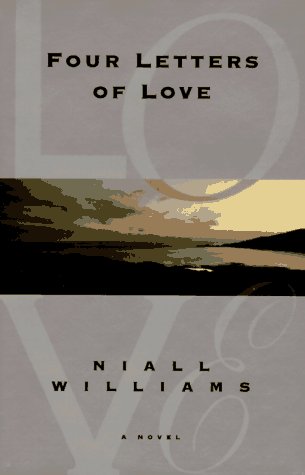 This sparkling, lyrical and touching piece of Irish magic realism is a first novel by a writer known previously--if at all to American readers--as the author of a series of nonfiction books, written with his wife, about life in a remote corner of Ireland. Certainly nothing in that past suggests the poetic assurance and narrative legerdemain of Four Letters. (The very title, in fact, is a play on words, with both the English and Latin words for love playing a role, as do significant missives written by several of the characters.) Two stories proceed side by side and eventually merge in a dazzling display of emotional and literary pyrotechnics. In one, a frustrated Dublin civil servant, William Coughlan, feels himself called by God to be a painter and sets off alone for the wild seascapes of the West of Ireland, leaving his wife and young son, Nicholas, to fend for themselves. In the other, schoolteacher Muiris Gore's family, living on a remote island off the shore of Galway, is riven when son Sean is mysteriously reduced to a human vegetable and his lovely sister Isabel feels somehow responsible. The fates of the two families are eventually intertwined when Coughlan's last surviving painting is given as a prize for Gore's early, thwarted poetry. Meanwhile, Williams conveys the shattering power of first love in a series of heartfelt scenes: Coughlan's desperate courtship of his wife; Margaret Gore's infatuation with Muiris; Isabel's unwise attachment to a young shopkeeper when she is sent away to school on the mainland; and, finally, the inevitable attraction that grows between Isabel and Nicholas when he comes on a quixotic errand to recover his dead father's sole masterpiece--and unknowingly brings about Sean's recovery. The tale, with its exquisite rendering of fickle Irish weathers, combines power and delicacy in the most careful balance; and the ultimate flowerings of magic seem only a natural manifestation of the hidden mysteries of the human heart. This could be one of the sleepers of the season. 50,000 first printing; $40,000 ad/promo; foreign rights sold in Germany, France, Netherlands, Denmark, Sweden, Finland, Italy and Portugal. (Sept.)
close
Details