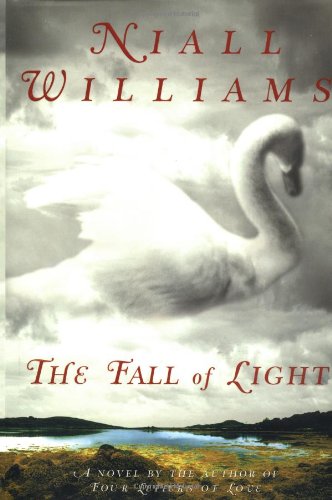 THE FALL OF LIGHT

The travails of the Foley family in the times before and during the Irish potato famine are the subject of Williams's overwrought, unashamedly romantic epic (after ). Francis Foley inherited his rebel blood from a father who was hung for treason by the English, but his marauding spirit is tamed somewhat when he marries Emer O'Suilleabhain, the daughter of a village schoolteacher. A gardener on the great estate of a mostly absentee grandee, Francis eventually takes to breaking into the big house and looking at the sky through his lordship's telescope, to Emer's dismay; their quarrels escalate into violence and she leaves him. Francis, desperate to find her, packs up his four sons, steals the telescope, sets fire to the estate and runs off. So begins a series of disasters that sees the Foley boys—Tomas, Teige and the twins, Finbar and Finan—separated and reunited several times as their destinies carry them to Hungary, America and Africa. Tomas, the oldest, falls in love with a beautiful prostitute named Blath, for whom he kills a man. Teige, the youngest, becomes a locally famous horse tamer and runs off with Elizabeth, the daughter of the squire he works for, and Finbar winds up the leader of a gypsy band. Francis himself is nearly drowned, and is rescued by monks; he searches for his sons and is finally reunited with Emer, now a blind woman. Williams veers from lyricism to blarney in swooping, misty paragraphs sure to please his readership.