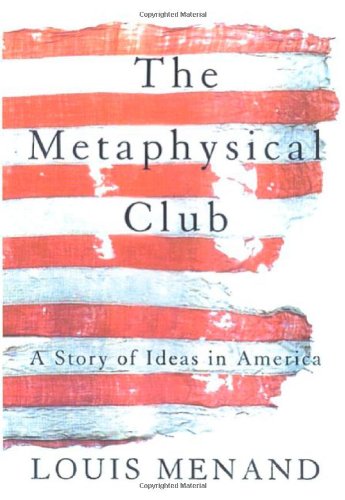 Between Reconstruction and WW II, U.S. law, politics, education and intellectual life gradually incorporated some big ideas. One involved the value of free speech, not as a natural right but as a social good. Another showed how what we think and believe may flow from what we desire and do, rather than vice versa. Another rejected absolutes in favor of experiments and experience, insisting (in Menand's words) ""that there is no one way that things must be."" Together these ideas and their progeny are called pragmatism, a home-grown method for splitting differences that launched the American Century, and that has been generating a lot of academic and punditocratic interest again recently, as it first produced the doctrine of ""cultural pluralism."" Menand, a New Yorker staff writer and Distinguished Professor of English at the City University of New York, brilliantly pieces together a broad-ranging cultural history of pragmatism, the times in which it emerged and diverged, and the intellectual curiosity that drove it on. Extraordinarily ambitious and compulsively readable, Menand's elegant big book shows how pragmatism's various ideas came together mainly through the work, talk and life experience of four menDSupreme Court Justice Oliver Wendell Holmes; William James, the Harvard-based philosopher, psychologist and all-around famous thinker (who popularized the word ""pragmatism""); Charles Sanders Peirce, a brilliant, philandering, spendthrift philosopher (from whom James took the word); and John Dewey, for decades America's foremost public intellectual. Holmes, James and Peirce (with their Harvard friend Chauncey Wright) formed, in 1872, a discussion group called the Metaphysical Club. The chapters these men inspire, which cover Holmes's Civil War duty and Dewey's tenure at the University of Chicago and more, move fluidly and cogently between works and personalities, between the currents of thought and their fruits in action. Readers of Menand's New Yorker and New York Review of Books pieces and of his incisive study of T.S. Eliot, Discovering Modernism, will recognize his deft syntheses of difficult ideas and disparate motivations. Menand interweaves Civil War battles; New England abolitionism; Darwin and his arrogant opponents; the Pullman strike of 1894; the Harlem Renaissance; G.W.F. Hegel; the Rockefellers; Eugene Debs; W.E.B. du Bois; the rise of the academic fields now called anthropology, philosophy, psychology, sociology and social work; and the history of (among other institutions) Harvard, Johns Hopkins, Columbia and the University of Vermont. The wealth of anecdotes, local exegeses and political asides will leave readers astonished. And the passionately maintained disinterest of the carefully constructed sentences and chapters comes amazingly close to that critical holy grail: transparency. Over its narrative arc and the arc of its subjects' lives, the book slowly and surely makes the ideas of another era available and usable to our own. (May 23) Forecast: Menand has edited the essay collections Pragmatism and The Future of Academic Freedom, and proposed higher education reforms in the New York Times Magazine. This book will be taken very seriously by pundits and will be extremely well-reviewedDwhich should translate into sales. Look for Menand on Charlie Rose-like programs in the coming months, and for a PW interview.
close
Details