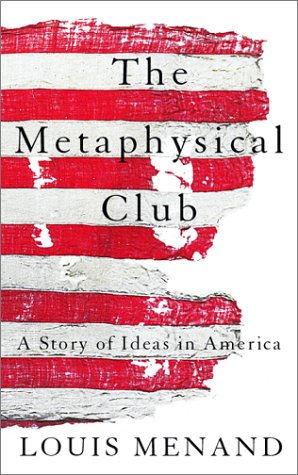 THE METAPHYSICAL CLUB: A Story of Ideas in America

The Metaphysical Club was an informal intellectual gathering of philosophers and academics that met in Cambridge, Mass., for only nine months in 1872. Menand, known for his contributions to the and the, follows the evolution of pragmatism as it emerged from the minds of four of the club's "members": Supreme Court Justice Oliver Wendell Holmes, William James, Charles Sanders Peirce and John Dewey. describes how the lives of these great thinkers interconnect in an enjoyable, though sometimes complex, narrative. Leyva's reading is fluid and clean. His delivery, that of an enthusiastic yet slightly removed academic, transports the listener to a classroom seat, alert and ready to take notes. Unlike those audiobooks in which the enthralled listener cannot wait to listen to each subsequent tape in order to see what happens next, listeners may find themselves rewinding the tape to repeat bits here and there, or just turning it off from time to time to digest the thoughts introduced. This audiobook is stimulating for our nation today, as Menand stresses the important role of intellectuals in times of chaos (in this case, after the Civil War), when people's beliefs are put to the test.