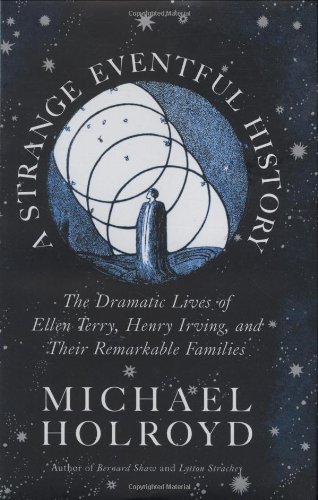 Holroyd's latest starts as a biography of Ellen Terry, one of the greatest actresses of the late 19th century—until it reaches the beginning of her professional and personal involvement with the even more legendary Henry Irving. The story circles back to recap Irving's life, then moves forward with their collaborations on Shakespeare plays and “blood-and-thunder melodramas” at London's Lyceum Theater as well as road shows in England and America. Holroyd also delves into the lives of their children (from separate relationships), and it's Ellen's offspring, Edy and Gordon Craig, who dominate the second half of this hefty family history: Edy took up with a longtime companion who originally had a lesbian crush on Ellen and would later become involved with Vita Sackville-West; Gordon was a visionary set designer who treated the women in his life—including Isadora Duncan—abominably. There's even a place in the saga for George Bernard Shaw (the subject of Holroyd's three-volume biography), who conducted a passionate correspondence with Terry for years before they ever met. Holroyd does a masterful job of keeping all the narrative lines flowing smoothly, ensnaring readers in a powerful backstage drama rivaling any modern celebrity exploits.