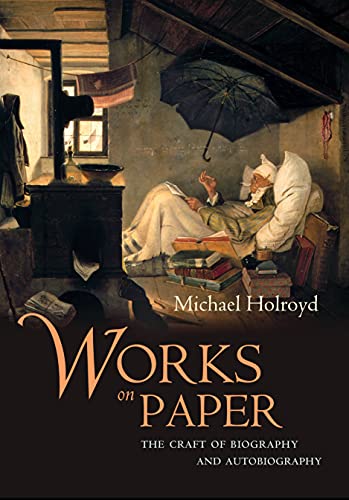 WORKS ON PAPER: The Craft of Biography and Autobiography Writing

Authors and celebrities have often derided the biographer's craft as downright parasitic. Rebecca West painted an image of biographers picnicking round the tombstones of the newly dead, "sucking the bones clean and flinging them over their shoulders." Holroyd (; ), one of the most distinguished biographers of the 20th century, responds to these charges both directly and indirectly in his new collection of essays, previously published in various journals and volumes. He argues that biographers bring hidden lives into view and therefore humanize our history: "By re-examining the past and pointing it in a new direction, it may now be used to question our understanding of the present, and affect our vision of the future." The liveliest pieces offer a generous helping of Holroyd's own reminiscences, particularly "The Making of ," a behind-the-scenes account of his attempt to befriend a cranky, ungenerous George Bernard Shaw scholar, and "The Battle for Public Lending Right," an account of Holroyd's battle for authors to be paid each time their books are checked out of the library. But the heart and soul of the book lies in the literary reviews; taken as a whole, they provide a sweeping overview of 20th-century British authors, trends and movements, including top-notch essays on Evelyn Waugh, Edith Sitwell, E.M. Forster, Augustus John and several writers of the Bloomsbury group. Holroyd's earliest essays were published in a 1974 collection, , and this selection of lectures, essays and book reviews, all written between 1973 and 2001, makes an excellent companion.