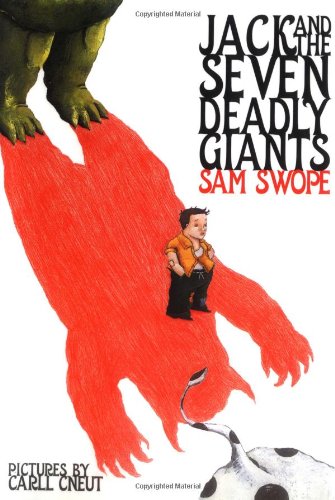 JACK AND THE SEVEN DEADLY GIANTS

In an unlikely and pleasing combination, Swope's ( ) tale draws on two staples—one from the nursery and one from the Bible. The story stars Jack of beanstalk fame, who uses his wit to outsmart villains manifesting the Seven Deadly Sins. Jack, the village "bad boy," was left as a baby on the miller's doorstep. At the book's sprightly start, the boy leaves town when the minister (who has recently preached about the Seven Deadly Sins) tells Jack that the "seven deadly giants" rumored to live nearby would surely "be the ruination of them all"—and that Jack was to blame, since "bad attracts bad." The itinerant boy shares an apple with a "funny little man," who gives Jack a magic bean that will grant him one wish. Jack's wish for his long-lost mother instead produces a cow, on whose back he rides as he encounters each of the giants in turn. Some of the riffs on sin are cleverer than others, and adults will likely appreciate them most; a few standouts—a gluttonous giant devours himself, greedy Avaritch gives Jack a comeuppance of his own, and "lust" takes the subtle form of a two-headed "Wild Tickler." The story concludes with a satisfying twist that reveals Jack's background, and Cneut's ( ) chapter openers—full-page, stylized halftone pictures—make the most of the septet's shortcomings, taking playful liberty with proportion and perspective. Ages 7-10.