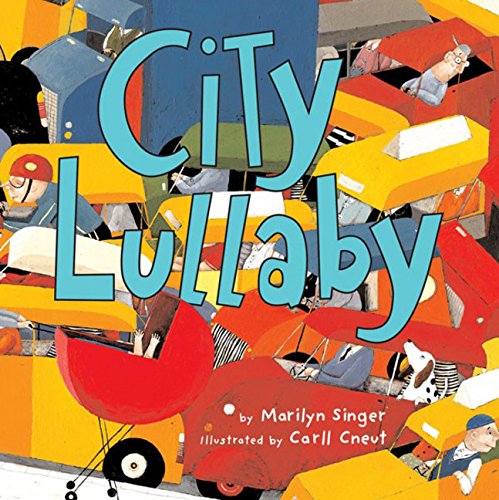 A baby sleeps in a red stroller, oblivious to the incessant cacophony of city sounds (“Seven cans bashing, eight dogs barking, nine phones ringing, ten horns beeping”). But when “one small bird, for goodness sake, chirpity-chirps, 'Tweet!’, ...Baby’s awake!” Singer ( ) fills her countdown-structured text with plenty of satisfying sounds, yet Cneut’s ( ) crowded paintings, rendered in saturated acrylics and pastels are the showstoppers here. On the recto side of each spread, he distills the baby’s face down to fringe of lashes, a smattering of freckles, and little arcs for a nose and smile; these float in white space, evoking the weightless unconsciousness of sleep (the baby’s fully realized face, complete with a single tooth, is revealed on the final page). The bustling, nutty scenes that occupy the verso side are an entirely different matter. Characters’ faces are edgy and angular, while the skewed geometry of the cityscape seems inspired by (some of the buildings appear to be teetering into the streets). At the same time, there are lots of sly bits of whimsy, like the dog gabbing on a cell phone. Readers can also hunt for the red stroller, tucked into each vignette. It’s a heady visual brew—and a funny valentine to the global metropolis. Ages 4-8.