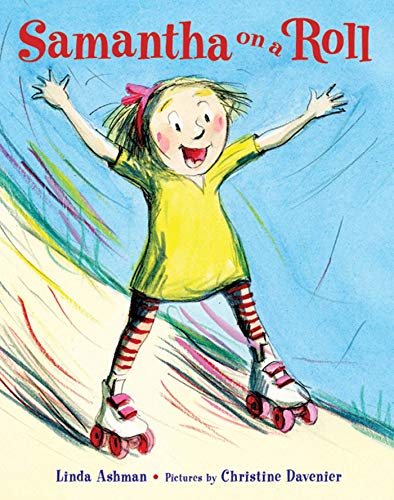 Samantha on a Roll

It’s rarely a good thing when a picture book goes downhill, but it sure is in this rousing domestic adventure—at least for readers. Samantha, ignoring her busy mother’s request that she test her new roller skates another day, straps them on anyway: “Sammy stands and rolls a bit./ Says, ‘I knew these skates would fit!/ I’ll just try them in the hall./ Mama wouldn’t care at all.’ ” Ashman (No Dogs Allowed!), meanwhile, sets straight any readers who might be entertaining similar ideas: “(Mama, talking to Aunt Joan,/ would have cared, if she had known.)” Emboldened, Samantha heads outside, but after she crests the top of Hawthorn Hill, she wildly careens downhill, picking up sporting equipment, a bridal veil, and a kite, while leaving the town in shambles. (In the tradition of Alexandra Day’s Carl books, Mama is none the wiser when Samantha finally gets home.) Working in pale greens, yellows, and oranges, Davenier’s (Miss Lina’s Ballerinas) characteristically loose artwork generates a sense of exuberance, motion, and old-fashioned fun, well-suited to Ashman’s lively verse. Ages 4–8. (Oct.)
close
Details