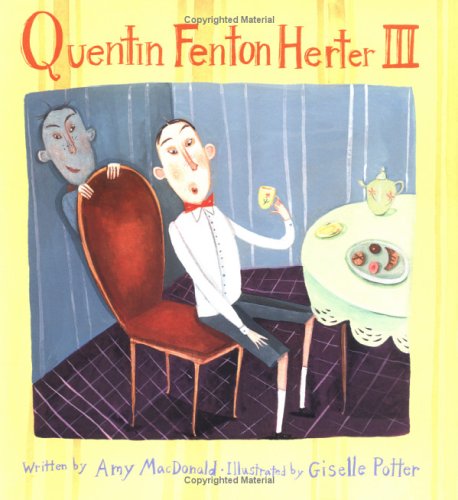 Tongue-in-cheek moral verse and puckish paintings of the pasty-faced Quentin and his evil clone provide drama, laughs and a reasonable vision of juvenile behavior. In MacDonald's () adroit couplets, Quentin Fenton Herter III emerges as a Goody Two-shoes who harbors a secret desire to be bad: "What Quentin Third would not admit:/ He wanted to be bad—a bit./ To throw a tiny little fit./ To drive his mother mad. (Admit:/ You've often—you, too—thought of it.)" Meanwhile, Quentin's "shadow," Quentin Three, spends his waking hours in a veritable spree of transgressions ("His friends he chivvied, teased and bossed./ And—sad but true—he never flossed!"), yet he dreams, just once, of doing good. The rebellion unfolds at a stuffy tea party: Quentin Third, unable to bear civilization a minute longer, loses his temper and sneezes all over his aunts' crumpets, and Quentin Three assumes the role of docile guest. Potter's () marionette-like figures wear a melange of period clothing, with the boys in knee pants, their teacher in a natty plaid suit and the aunts in governessy Edwardian dress. She enlivens the interiors via a series of running visual jokes (e.g., they have twin sets of toys, with Quentin Three's in predictable disrepair). Readers will appreciate the Quentins' double liberation: "Were they GOOD?/ Or were they BAD?/ The answer is, as you might guess,/ a loud, resounding, heartfelt... YES!" All ages.