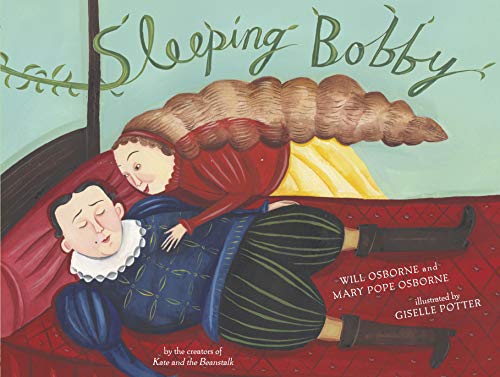 The creators of update "Sleeping Beauty" by casting Prince Bob in the lead. With that exception, this wittily told version adapts readily to the exchange of male and female roles. Prince Bob's birth is a joyous event, and the happy king and queen invite 12 Wise Women to bless their son: There are 13, "but since the queen had only enough good china to serve twelve, one had to be left out." After the uninvited guest declares that Bob will "prick his finger on a spindle" and die on his 18th birthday, another promises not death but instead a century-long nap. Despite his parents' attempts to banish all spinning wheels, Bob has "great curiosity and a taste for adventure," and gets lured to the dangerous instrument. Potter suspends the snoozing, sepia-tinted characters against an ethereal blue backdrop. Afterward, bachelorettes trade "rumors [of] a kind, clever, modest, and handsome prince," and become tangled in the formidable palace hedge. Only one princess, with "a taste for adventure" like Bob's, beats the thorns ("If this Bob is all they say, it will take more than some shrubbery to keep from meeting him"). The Osbornes' conversational prose lends itself to being read aloud, and Potter's mixed-media paintings suggest destined romance and humble magic between the well-matched couple. All ages.